We take a tourist boat along the coast of Mount Athos to the end of the peninsula. It is packed with men and women of all ages on a parish pilgrimage. Although I have been on Athos several times, it is impressive to see it from the sea, especially the breathtaking monasteries of the rocks perched on vertiginous cliffs. Seagulls in the air keep us company, dolphins arcing in the water lead us on.

Opposite Xenophontos monastery we think we have broken down because the boat stops and drops anchor with ominous mechanical growlings. But rescue is at hand. A little speedboat of the kind that pulls water skiers zips on a cloud of spray from the shore, manned by four monks, two of them standing in the cockpit, robes streaming behind them. The two that were sitting in the back of the boat are older and more distinguished than the lads having fun in front.Our boat lowers a platform at the stern and they climb aboard. 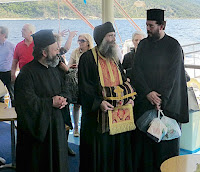 They have indeed brought salvation, a spiritual kind, in a black chest and a couple of polished wood cases. On a table swiftly erected by the crew on the rear deck they lay out an altar with cloths and bejewelled caskets of relics. Xenophontos has a drop of blood of John The Baptist and a fragment of the skull of St Stephen the first martyr, but I don’t catch if they are included. One of the young monks puts the wooden cases on a table next to the bench where we are sitting. He opens them up to reveal a travelling repository of medals, crucifixes, icons, prayer ropes and other souvenirs soon to be transmuted into contact relics.

I join the crowd for chanting and hymns and browsing the memento tray then queue up for the veneration, handing little plastic bags of purchases to the presiding priest to dunk onto the caskets. My wife looks on, bemused, as I take my turn, make the sign of the cross, bow and air-kiss the caskets.“See, woman, if you can’t go to Athos, Athos will come to you,” I say when I come back to the bench. She frowns. When everyone is catered for the monks pack up. The one in charge of the repository next to us presses a little icon of the Virgin into my wife’s hand and smiles. She scrabbles in her purse for money but he puts his free hand on his chest. The monks get into their boat with smiles and handshakes to speed back home in a cloud of exhaust and spray. My wife is touched. She still keeps the icon in her handbag. 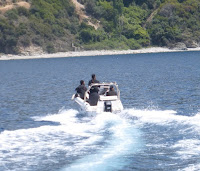 Xenophontos has several other enterprising ventures reaching out to the wider world. Apart from icons, Turkish Delight, its own label wine - the white is not bad at all - the monks market a range of pharmaceutical products, including hair restorer and haemorrhoid cream, of which I have heard good reports from pious friends in Athens.

We take a tourist boat along the coast of Mount Athos to the end of the peninsula. It is packed with men and women of all ages on a parish...